Akira Jimbo is an international drum sensation who is known as an accomplished freelancer and expert in fusing electronic drums and acoustic drums. Though not a member of any big band, Akira has created an empire for himself in the drummers world by producing several world class solo albums and been featured by other renowned artists.

Born on February 27 1959 in Tokyo Japan, Akira started playing drums at a very age. He was a drum virtuoso whose aims went beyond Japan. His professionalism in drums was seen while he performed at the Keio University in Japan. He was a member of the Light Music Society Big Band. While in the band he developed a lot as a drummer.

In 1981 Akira joined a famous Japanese jazz fusion band, Casiopea. Casiopea was started in 1976. The founders were Issei Noro, a respected Japanese composer and guitarist, and Tetsuo Sakurai, a bassist. The group has produced jazz master pieces which have been marketed world wide. They have released albums such as the 1981 release, Eyes of the Mind, which was released in the US. Others of their albums include Mint Jams, Four by Four, an album that was jointly done with a few members from the band Fourplay. These included Lee Ritenour, Harvey Mason, Nathan East and Don Grusin.

Akira has been busy producing music and touring all over the world performing to thousand of fans. After years of writing, performing and producing records, Akira was recalled back to Casiopea, but he agreed to work on part time basis. Since returning back, Akira has helped the band to record more albums and has been touring with them promoting the albums. He has also composed a number of records for these albums. Casiopea has not been operational from 2006 after Issei Noro, the group leader put their activities on hold for a while, but their music still sells in leading stores world wide.

Akira also conducts clinics tours in many parts of the world. He shares his expertise with music students and music enthusiasts in various music stores and campuses. He always advice his listeners to pay attention when playing drums since by overlooking small details they can’t set the timing right and the presentation goes awry. He especially points out that one way of getting timing right is by taking care of the quarter note fill, which he feels that by getting it right, the other notes just fall into place. Akira has recorded his skills in four noteworthy instructional videos; Pulse, Metamorphosis, Independence and Evolution.

Akira has done many a number of side projects including one with Keiko Matsui, one of the leading Japanese smooth jazz, new age keyboardist and composer and one of the most successful women jazz players in the world. He has done a side project with Shambara and Brian Bromberg, an American bassist and record producer.

Akira is also involved in a side project with Hiroyuki Noritake, a drummer from T-Square. They have been playing drums together under the name of Synchronized DNA.

Akira is widely respected for his unique style of playing drums. In his technique, he employs the DTX drum trigger system that can trigger various acoustic sounds from electronics drums. The system, which is exclusively manufactured by Yamaha, enables him to eliminate the use of backing track, but still be able to play full band sound.

Akira’s efforts have not gone unnoticed. RHYTHM, a British drum magazine, awarded him second place for most popular drummer in 1999. He was also featured on the cover of the June 2000 edition of Modern Drummer, becoming the first Asian drummer to reach that feat. In the same year, he took part in the Modern Drummers Festival, a performance that is now available on DVD. 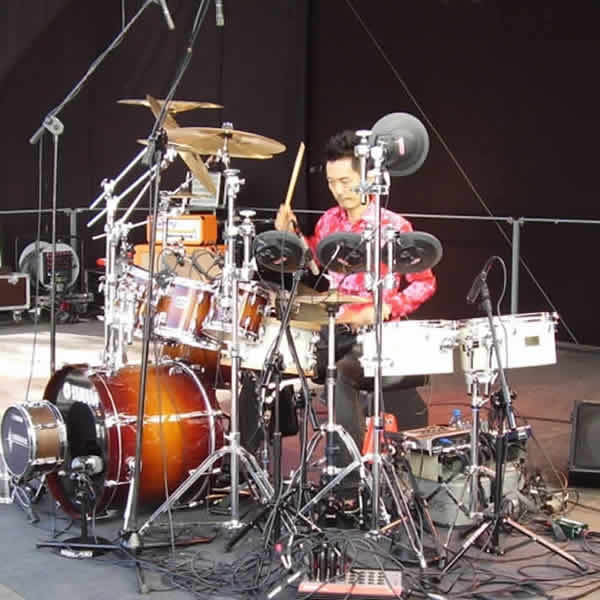