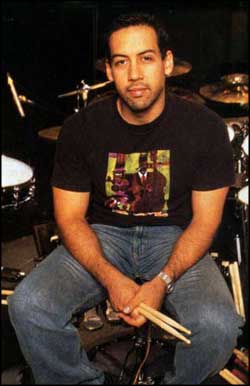 Probably one of the most talented jazz and Latin drummers of all time is Antonio Sanchez. With over 8 years of post secondary musical education, it is no wonder why he has excelled to the drummer he is now. Many people know him for his work with the Pat Metheny group; however his achievements go far beyond that. Sanchez has played many drum clinics across the world, and specializes in lengthy polyrhythmic solos. He is known for mastering the left foot clave, bringing forth independence that is unheard of by many professional drummers.

Antonio Sanchez was born on November 1, 1971 in Mexico City. He started playing the drums at the age of 5, and has not stopped ever since. After just a handful of private lessons, he knew he wanted to take his musical career to the next level. After playing many jazz, rock and fusion gigs, he enrolled in the National Conservatory of Music in Mexico City when he was 17 years old. Here he studied piano, composition, traditional harmony, counterpoint, arranging, and vocal ensemble.

Antonio studied there for 4 and a half years. He then received a scholarship to attend Berklee School of Music in 1993. He did not hesitate to accept this honor, and immediately began to study all different types of jazz. Here at Berklee, Sanchez also studied jazz arranging, improvisation, jazz composition, ear training, and harmony. It was here at Berklee where he got recognized by some of the top teachers of the school; these teachers were the ones with massive connections in the jazz community.

Upon graduating from Berklee, Antonio received another scholarship for a Masters in Jazz Improvisation at the New England Conservatory of Music in Boston. Again, he went back to school. It was here where he started playing for top musicians like Paquito D’Rivera and Mr. Perez. Through his next few years, Sanchez grew in popularity in he jazz and Latin music scene. He played many drum clinics in Europe, Japan, North and Latin America. He also played for PASIC, Modern Drum Festival, and the Montreal Drum Festival.

During a show with Perez, a talented musician named Pat Metheny was playing with them. He couldn’t help but notice Antonio’s talents, and decided to audition him for his group. When Sanchez was growing up, he dreamed of playing for Metheny, since he was one of his favorite musicians. After a few months of auditions, Sanchez joined the Pat Metheny group, which still plays and tours to this day.

Antonio Sanchez currently endorses Yamaha drums, Zildjian cymbals, and Latin Percussion. He is known for is incredible independence with both his feet and hands, being able to play polyrhythms and left foot clave overtop of any beat or solo. When he was growing up, his influences were progressive rock and heavy rock; mainly Rush. However, as he grew, his desires to play jazz became too great, and he started a career in jazz and Latin music.

Antonio Sanchez has inspired drummers everywhere, as he has shown them what can actually be accomplished by the human body on the drums. He can truly partition his mind to be able to play a different rhythm on each limb independently. For this, and the sheer skill and talents of his drumming ability, Antonio has become a drumming icon. He is currently living in New York City, where he continues to play and record for jazz musicians all over the place. 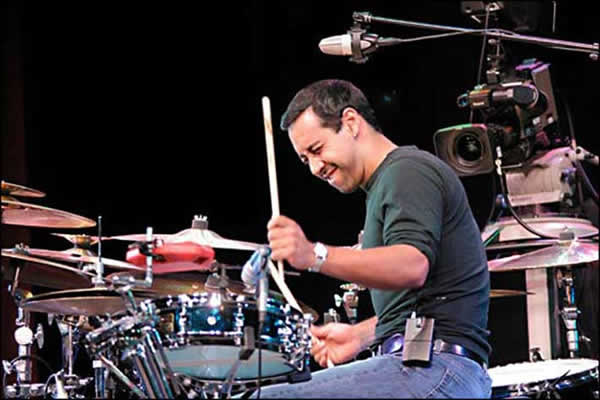