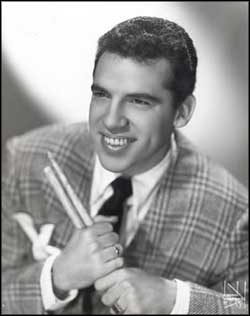 Bernard “Buddy” Rich was born on September 30th, 1917 in Brooklyn, New York. He is considered as one of the greatest American Jazz drummers of all time. Buddy Rich showed signs of remarkable musical talents at a very early age. In 1921, his vaudeville act “Traps, the Drum Wonder”, brought him to the limelight. He was the highest paid child artist after Jackie Coogan at that time.

Buddy was a wonder, a tenacious and highly skilled drummer despite the fact that he had no formal musical education. He was a multitalented artist who became successful in whatever he undertook by merit. In 1921, he debuted on Broadway in Raymond Hitchcock’s Pinwheel. A self taught musician to start with, Buddy Rich also studied tap dancing, singing, and was a black belt in Karate.

In 1931, Buddy's parents retired and settled in Brooklyn. In 1937, he started playing with Joe Marsala at New York’s Hickory House. In 1938, he joined Bunny Berigan’s Orchestra and Artie Shaw. In 1939, he started playing with Tommy Dorsey’s Orchestra. During all his public performances, he was able to meet many musicians who showed interest in playing with him or who shared valuable artistic tips with him. Buddy Rich got the chance to play with Dizzy Gillespie, Charlie Ventura, Gene Krupa, Louis Armstrong all in the same year. He was a well-acclaimed and widely known drummer by this time. Rich also had occasional friendly Drum Battles with drummer friend Gene Krupa.

In the 1940s, he appeared in movies like How’ About it, Symphony of Swing, and Ship Ahoy. In 1942, the book ‘Buddy Rich’s Modern Interpretation of Snare Drum Rudiments’ authored by Rich and his teacher Henry Adler was released. The book is regarded as the greatest snare drum rudiments book ever written. The books’ sales were phenomenal mainly because of Rich’s contribution and fame.

From 1945-47, Buddy rejoined the Dorsey Orchestra and also formed his own band with Tadd Dameron, Zoot Sims, Al Kohn, Tony Scott and Jonny Mandell. After his band’s popularity waned, he joined hands with Norman Granz’s Jazz band. He toured with Norman Granz as part of the the Jazz Philharmonic Tours in 1945 and 1946 all around the world. In the 1950’s, he worked and recorded with Les Brown, Dizzy Gillespie, Thelonius Monk, Charlie Ventura, Lionel Hampton and many more celebrity musicians.

During 1953 to 1966, he joined Harry James but at the same time worked alternately with the Tommy Dorsey Orchestra. In 1959, he had heart attack, but it didn’t stop him from continuing his music career. After his recovery he went back to drumming in full swing. Nothing could slow him down.

He left Harry James in 1966 to form his own big band with players like Gene Quill and Pepper Adams. Though the popularity of big bands was decreasing, he was determined to keep on playing with them and did so with success. He later worked and recorded outstanding music with artists like Don Menza, Art Pepper, Pat La Barbara, Steve Marcus, Al Porcine. He opened two nightclubs, Buddy’s Place and Buddy’s Place II and also toured with the bands for gigs and public shows. His clubs had great fame due to his music. They were huge crowd pullers and were always full.

During the 1960s, he appeared on many TV shows. In 1967, Jackie Gleason specially chose the Buddy Rich Orchestra for his T.V. series. Rich even toured with Frank Sinatra in autumn, the same year. Rich had a great sense of humor and due to this many talk show hosts like Johnny Carson endeared him. He was also a regular guest of Mike Douglas and the Merv Griffin show. One of his most seen television performances was in a 1981 episode of The Muppet Show. His reputation among big media personalities was amazing due to his goofiness. He was highly respected even by VIPs like John F. Kennedy, King of Thailand, Ronald Reagan and many others, who were his great fans. His performance in West Side Story Medley for Big Band Arrangement was a blockbuster. It is until now considered one of the most complicated big band arrangements.

In 1974, Buddy formed a small group of artists which included Sal Nistico, Sonny Forture, Joe Romano and others. This group toured and performed together till Rich’s Death in 1987. In spite of Buddy Rich’s well known bad temperament and bossy nature, he was a cheerful and vigorous man. He had a great sense of humor and liked to pull practical jokes. He remained active till his death and was perfectionist in his music production.

Buddy Rich died of a heart failure on April 2, 1987, while undergoing a surgery to remove a malignant tumor of the brain. His eulogy was read by his long time friend and jazz legend, Frank Sinatra.

Buddy Rich was an amazing and very entertaining drummer to watch. Check out these Buddy Rich drum videos if you are interested in seeing Buddy Rich in action. 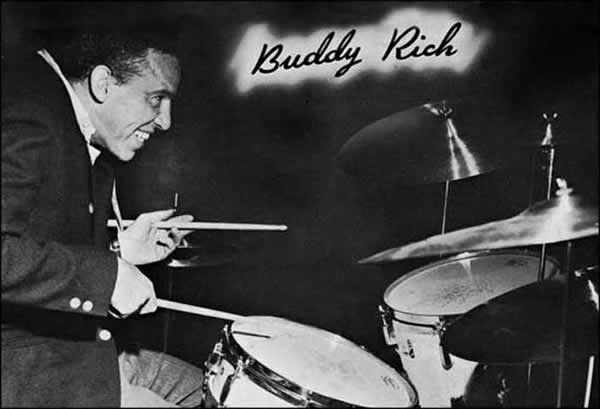