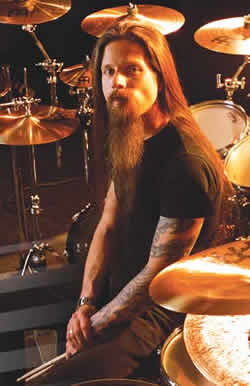 Chris Adler, born November 23 1972, is the younger brother of Willie Adler. He attended the famous Bishop Ireton High School in Alexandria, Virginia. As a child, Chris began playing with broken sticks from his backyard on his parent’s empty coffee cans and pots. While he was growing up he started playing piano and saxophone with his mother. He finally settled on playing the bass, which he did with several high school bands and projects. And later went to college at Virginia Commonwealth University in Richmond, Virginia where he came in contact with his current bandmates John Campbell and Mark Morton. Adler is a true American drummer and is well known as a member of the metal band Lamb of God. He is a multi talented and plays a couple of instruments like the piano, acoustic guitar, bass guitar, and saxophone.

Chris played bass on different records and toured the US from 91 to 94. When at home, Chris played around with his first drum kit in his bedroom while the neighbors were at work. In September of that year, Chris got in touch with several members of his freshman dorm year, and who were interested in starting a band. This is when Chris decided to play the drums full-time.

Chris’s drumming technique helped to push the band to its pinnacle, and his non- traditional methods of playing choices and agility got him much attention and praise. The band became one of the most downloaded metal bands of all time on the now no longer, MP3.com which got the attention of several record labels. The band knew that they were doing something extraordinary by breaking through the underground music scene and taking that leap of faith.

In 1999, the band changed their name to LAMB OF GOD and signed a record deal with Prosthetic records. By September 2000, the groups debut CD New American Gospel was released and Chris was quickly approached for his first article in Modern Drummer Magazine. Chris’ unique style, timing and speed combined with the amazing guitar work made this release become a unique one of a kind album among the many underground metal bands of that time. Two years on the road helped Chris get into rigorous practice and stick to a disciplined schedule.


As his band Lamb of God gained immense popularity through the years, Chris’s reputation as an exemplary drummer in the metal scene grew as well. They chose the name because of the religious angle it had to it (but in a twisted sort of sense). He also took the trouble to write his drum parts with the views and ideas given by other band members. Even on a DVD that he made, Adler tries to generate a kind of music that does not deprive the song in any away or cheat it of its beauty. He utilizes a method of symmetry in his drumming and is highly skilled in his double bass work. Chris also makes unique sticking patterns to go along with his unique double bass playing style. The main reason for the unique sticking style is that he is a left-handed drummer on a right-handed set. And this makes a great combo.
From his youth he has been influenced a lot by drummers of the metal world including Lars Ulrich of Metallica, Shannon Larkin of Godsmack, Dave Lombardo of Slayer, and Vinnie Paul, current drummer and founding member of the band Hellyeah and also other magnificent drummers such as Bill Bruford, Terry Bozzio and Billy Cobham.

At the end of 2005, the band stopped touring and returned home to Richmond, VA, to begin writing the next chapter. An intense 8-month writing process followed. Chris goes on to say how they almost worked 6 days a week, almost 8 hours a day and pushed themselves, professionally to the brink because they wanted to create and give such a performance that was something that could not be generalized or put in a particular category.
Sacrament was created in 2006, a record that places a lot of importance on the growth of the band members, as players, writers and people, and testifies of their victory over tribulations. The songs are sad and have a dark side, and yet are like a merry-go-round ride that leaves you breathless, excited, and terrified at the end.
The album’s first week sales got them the 27th spot on the Top 200 Billboard Charts. The record was released and now they are focusing on having an amazing Fall and Winter tour of the UK.