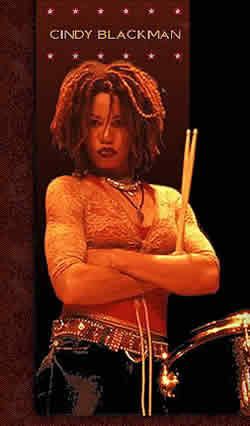 Cindy Blackman was born on November the 18th 1959 in the state of Ohio. Cindy is a rock drummer by profession. She's been fortunate enough to play and record with the likes of Lenny Kravitz. Cindy grew up around music, her mother as well as her grandmother and even her uncle were associated with classical music. Her uncle actually used to play the vibraphone. Her mother took her along to watch classical concerts, also, her father was into jazz who admired artists like Ahmed Jamal, Miles Davis, etc.

Cindy started playing drums at the age of seven and after years of playing Cindy then moved to Connecticut where she studied music at the Hart College of Music. Jazz music was her first love and during her early teenage years, she listened to a lot of Max Roach and all thanks to her intense dedication to the art of drumming, she got her first ever professional drum set at the age of fourteen. Besides, Cindy always felt that jazz was that type of music that posed as a challenge for her. However, she was totally unaware of the fact that drummers actually used their hands as well as their feet to get the perfect beat and she did everything that she could do learn the various techniques.

She was mainly influenced by the way Tony Williams played because she says that she actually felt the impact of his drum beats whenever he played. She considers herself honoured to have had the opportunity to have seen him play. When one of her friends advised her to perform a gig with The Drifters, she immediately moved to New York. She got an opportunity to meet many of her favourite musicians like Al Foster, Jack DeJohnette, etc. Then Cindy came across Art Blakey who was more like a father figure to her and who she looked up to. He taught her all that there was to it with respect to learning drums. However, it was a bit difficult for Cindy during the earlier days since she was a Black American and even more the fact that she was a woman in the music scene that was dominated by men. In fact, she even found that some people took it more as an issue when she wore an Afro. However, she simply ignored those aspects and concentrated in improving her drumming skills. All thanks to her drumming skills, some of Cindy’s work was even showcased on the radio channel in New York WKCR-FM. It was then that she debuted as a bandleader in the album Arcane. The band consisted of Wallace Rooney playing the trumpet, the saxophones played by Joe Henderson and Kenny Garrett, Clarence Seay and Buster Williams playing the bass and finally the piano played by Larry Willis.

After some years, Cindy Blackman auditioned for Lenny Kravitz and she became the drummer for his band. She actually played the drums for him over the phone after which he called her over to Los Angeles. She was totally unaware that she was appearing for an audition but she finally made it as his drummer. She has played with him ever since 1993 except for 2004, she has been his drummer ever since. However, once she started playing with him, she soon realized that what she used to play, i.e., jazz and Lenny’s style of music were different altogether. That’s because, when it came to playing with Kravitz, she simply had to play a drum beat for hours but at the same time, make the beat feel good. When it came to playing with her own band, she had to add a more creative flavour to the entire thing. Star Gazette has referred to her as being one of the hottest drummers in the business. She has also come out with her drumming instructional video called “Multiplicity” in 1998. Taking into account her energy and her passion, Cindy Blackman is here to stay and will continue to enchant her audience with her drumming beats. 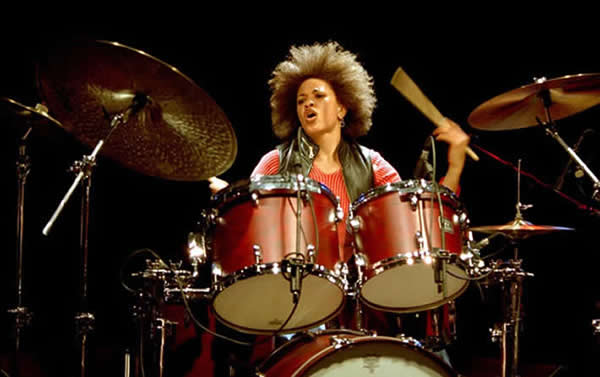