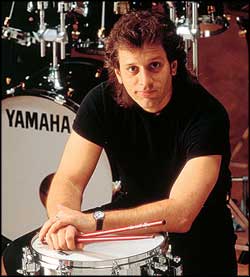 Dave Weckl is a drummer par excellence, who has earned respect and admiration from his peers and fans across the world as one of best living drummers. His artistry in fusion has always gained him a mention from people of repute in the jazz world, making his climb to success a smooth one. Born on January 8th, 1960, in St. Louis Missouri, Dave’s first inspiration to become a musician came from his parents. His mother was an ardent lover of music and his father a fine piano player, who played piano as a hobby. At the age of eight, Dave started playing drums with noteworthy dexterity.

While in high school, Dave Weckl was an outstanding performer. He joined the school jazz band and went on to win several awards from NAJE (National Association of Jazz Educators). He received early training from local St. Louis-area teachers Bob Matheny and Joe Buerger. It was not long before Dave started performing professionally with local bands at St. Louis. He was 16 years then. In 1979, he moved to University of Bridgeport where he majored in jazz. Two years later, he joined the New York jazz scene, performing with a New York band, Nite Sprite. While performing in a club one night, Dave was noticed by drummer Peter Erskine who hooked him up for a gig with French Toast band. The band featured jazz greats like pianist Michael Camilo and legendary bassist Anthony Jackson.

After a successful stint with this group, on Anthony Jackson's recommendation, Dave joined Simon and Garfunkel on their reunion tour in 1983. This tour was a stepping-stone for better things to come. Soon, Dave was regularly called to play jingles for radio and television. He also has studio recordings with world renowned artists like George Benson, Diana Ross, Robert Plant, Peabo Bryson, among others.

Dave continued working with French Toast and got time to do sessions with other bands too. He concurrently worked with Bill Connors (Return to Forever), the Brecker Brothers, Tania Maria, Paquito D'Rivera, Eliane Elias, and George Benson. In 1985, Michael Brecker introduced Dave to Chick Corea. The following year, Chick Corea saw Dave perform with guitarist Connors in New York. His performance impressed Corea, who invited him to join his newly formed group, Elektric Band. The two worked together fruitfully for seven years, working with both Elektric and Akousitc Bands. During this time, they produced nine recordings and three videos. The first Akoustic’s release won a Grammy too.

While with Elektric Band, Dave matured as a drummer and his cutting edge drumming style won him applaud around the world. After parting ways with Chick Corea, Dave toured and recorded with guitarist Mike Stern. Dave was not only successful as a sideman or ‘band’ man, but as a solo artist as well. In 1990, he released his first solo album, Master Plan. This was following by Heads Up and later came Hardwired. He has so far produced nine solo recordings. In 1998, Dave formed his own band, his long time dream. The band was named Dave Weckl Band. The band has so far released five studio recordings which include Rhythm Of The Soul, Synergy, Transition, Perpetual Motion, and Multiplicity. They have released a greatly acclaimed album Live (and very plugged in).
Dave Weckl has also been involved in teaching music and the music business. Though he is a busy man, working for his band, Dave still gets time to share his expertise with students. He offers lessons to a limited number of students. He has also developed a Virtual Drummers School, where students can learn online. Dave has developed and produced a number of instructional videos on DVDs which are on sale worldwide. One of the most celebrated of the instructional DVDs is The Zone, which is a compilation of instructional videos. His passion to give back what he has learnt as a drummer can be traced from his own words when he said that it was his goal to inspire as many young (and not-so-young) people as possible to want to play music, whether it is on drums or any other instrument. He asserted that with all the negatives in the world today, he feels that music is his way of contributing a positive action toward spiritual happiness, which music can be a big part of, if you let it. He also urges the parents to let their children develop their musical talents.

Besides music, Dave has a great liking for cars. He especially loves his 440 horsepower Lingenfelter Camaro, a speed machine that accelerates from 0-60 mph in 4.2 seconds! He has been named “among the top 25 drummers of all times” and been featured on the covers of various music and lifestyle magazines. He has endorsed and helped to improve quality products for various companies too. But with all his scheduled, fame and success, Dave says that his greatest passion is spending time with his daughter, Claire, his pet dog Sophia and friends. 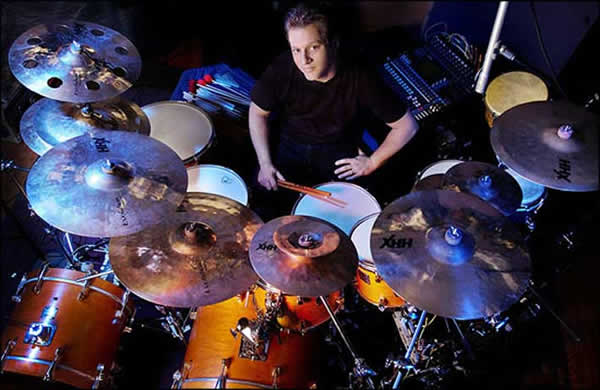