Eugene Bertram Krupa was one of the greatest drummers in the music world who will be remembered as the first one to introduce drums as a solo instrument. His most famous works include his epic “Sing, Sing, Sing” in 1937. Krupa had a great influence on music. His life was dedicated to music and he can be said to have won for drummers a new freedom to express themselves.

Gene was born in Chicago, Illinois on January 15, 1909 and was the youngest of nine children. He exhibited musical talents when he was very young and learned to play drums by 11. His parents were very religious and his mother specially wanted him to become priest. But Krupa found solace in music and slowly gave up the idea of studying priesthood.

In 1921, while still in grammar school, Gene joined his first band "The Frivolians." He got to join them when their main drummer became sick. When he went to high school, Krupa joined a group called Austin High Gang. This was his first recording session. In December 1927, he recorded with Red McKenzie’s and Eddie Condon’s Chicagoans and performed in jam sessions at the 3 Deuces. He was the first drummer to enthusiastically double bass and drums and off beat tom-toms together. The style was known as ‘Chicago Style’.

In 1929, he moved to New York, where he worked with commercial groups such as Red Nichols’s Five Penny, Bix Beiderbecke Band, Benny Goodman, Adrian Rollini, a saxophonist. In 1928, he appeared on six recordings of Thelma Tery Band.

In 1934, Benny Goodman’s new Orchestra caught Krupa’s attention. On Benny’s request he joined the group with hope to make a successful jazz band. The band didn’t do well initially and Benny almost called it off but when they were engaged at the Palomar, they decided to play their original arrangements. They were received with cheers and from then on they played with great success. He played on NBC- Radio’s ‘Lets Dance’, 1934 while with the group. His drumming style featured in ‘Sing, Sing, Sing’ in 1937 was the launching of solo drumming in Jazz history.

Krupa’s power of showmanship made him widely acclaimed and famed. He became a darling of audiences around the world. This brought on tension between him and Benny since Benny felt he was losing his popularity to a mere sideman. Consequently, Krupa left the group in March 1938. Two months later, Krupa formed the Gene Krupa Orchestra, whose members included Vido Musso, Flyod O’Brian, Mitt Rashin, Sam Donahue, singers Irene Daye, famous Anita O’Day, Trumpeters Roy Eldrige and Shorty Sherock. The band was an instant hit and recorded well known songs like ‘Let me off Uptown’, ‘Rockin Chair’, and ‘After You’ve Gone’.

Krupa will also be remembered as the father of modern drum sets after he convincing H.H. Slingerland to design tunable tom-toms. He even helped Avedis Zildjian to develop the modern hi-hat. In 1938, Krupa wrote his own book “The Gene Krupa Drum Method” and later in 1941, started a Annual Drum Contest. Louie Bellson the legendary drummer was the 1st year winner. Due to his famous presence in public, he was offered roles in movies like Beat the Band, Some like it Hot, Hollywood Hotel, etc. In 1941, Krupa and his band appeared in movie “Ball of Fire” and they played Drum Boogie in extended version.

1943 brought unfortunate times for Krupa. While in San Francisco that summer, he was arrested and charged with possession of marijuana. He was found guilty and sentenced to 90 days imprisonment. However, after 80 days he was released on bail. This event brought lots of public attention and negative critics. This cost him heavily and lead to the breakup of his orchestra. After his release, Krupa reunited with Benny Goodman and this time there were no hard feelings. Later, he joined Tommy Dorsey. Shortly afterwards, in 1944, he organized his own Big Band and a new experiment with his music began. He introduced a string section and the famous Bop. Gerry Mulligan helped in Bop arrangements. Anita O’Days joined in the band again and it won its lost fame. “Ten Ritchie Drive”, ‘Challenging the Challenger’, ‘Bugle Call Rag’ were released.

In 1946, Warner Bros released cartoon “ Book Revue” which had symbolized sessions of Krupa’s Drumming. He disbanded his successful Orchestra in 1951, two years after Anita O’Days departure. At this time, his career seemed to dwindle mostly due to bad publicity. He however went on performing with small jazz bands. He joined Norman Granz’s Jazz at the Philharmonic. Here he worked with Buddy Rich and occasionally collaborated with Goodman Quartet. In March 1954, Krupa- Cole School was formed with fellow drummer William Cozy Cole.

In 1960, British Band Apollo 440 wrote song on Gene Krupa’s style named ‘Krupa’. In the same year, Krupa suffered a heart attack and his back problems increased, forcing him in to semi- retirement. During this free time, Krupa took clinics, anti-drug lectures and coached his baseball team. He occasionally recorded with the Goodman Quartet. In 1972, he gave a final farewell concert with his Chicago mates that included Eddie Condon and Dick Wellstood. 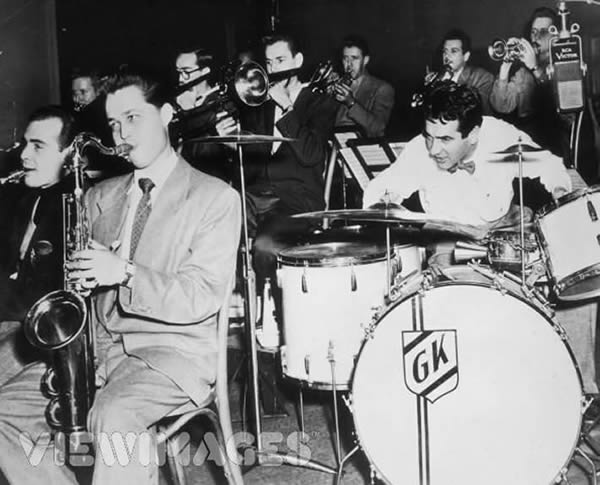