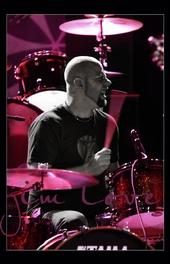 Jim is a very active performer, studio musician, educator, and clinician. He can be seen performing regularly on the east coast with his own jazz/funk group Jim Love & The Blue Groove, funk/blues-based rock Laura Cheadle, singer/songwriter Valerie Oswald(Dreamscape Records), Philly-songsmith Adam Monaco, VH1 soul artist Joshua Hill, and free-lancing in a variety of different musical situations. He has performed/toured with such groups and artists as the Celtic/folk Grammy-nominated group Wyndfall, the electric jazz trio Spectrum, modern rock band Needlejack, Shania Twain, DJ Dstar, Don Liuzzi (Philadelphia Orchestra), the Central Pennsylvania Symphony, the Gretna Theatre, the Bainbridge Band, the Dutch Apple Dinner Theater, the Harrisburg Men's Chorus, the H. S. O. Swing Band, et. al. , He is currently the tympanist/principal percussionist with the Lansdowne Symphony Orchestra, and was previously the tympanist/principal percussionist for the Hershey Symphony Orchestra from 1992-2002. In 2001, Jim released his debut solo CD, The Way of the Drum, on Dreamscape/Wyndfall Records. In 2003, The Blue Groove released their first disc, Gather ,Round, and subsequently Guerrilla Groove in 2005, all three of which were met with critical and fan acclaim. Jim can also be heard on recent releases by other diverse artists such as Chris Laugherty, Valerie Oswald, Joshua Hill, Laura Cheadle, Some Days are Lovely, and others.

In addition to his performing, Jim is a very active educator. He holds a B. S. in Music Education from Elizabethtown College, and has studied/continues to study drums and percussion with Dr. Robert Brosh, Joe Morello, Clyde Lucas, and Gary Luckenbill. He has been teaching privately for 15 years, maintaining a student roster of approximately 70 students. For 9 years he served as Percussion Instructor/Arranger for the Elizabethtown Area H. S. Marching Band, and has worked with several other school bands, including Warwick, Manheim Central, McCaskey, and Columbia High Schools. In 5 years of T. O. B. marching band competition, his percussion sections won 12 High Percussion Awards. He has done several clinics and camps in the Lancaster area and at area schools/churches, and has a teacher endorsement from Vic Firth Sticks and Mallets. He was one of the founding members/directors of the Lancaster County Percussion Ensemble, and has taken many school-taught ensembles to perform at venues/festivals such as the P. A. S. Day of Percussion and the P. A. S. Percussion Ensemble Festival. Jim has also taught a course entitled "Rock School 101" at Montgomery County Community College in suburban Philadelphia. Jim was named to the prestigious Who's Who Among America's Teachers in 2005 and 2006.