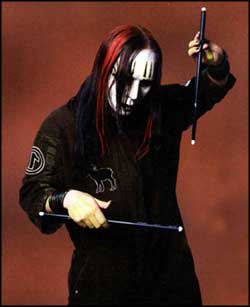 Joey Jordison was born Nathan Jonas “Joey” Jordison on April 26, 1975. He is a rock and heavy metal musician, best known as a drummer with the band Slipknot. He is also known for his speed while playing drums, a quality that has made him a star on the rise, and a hero especially for the young and hardcore lovers of rock. He has not only performed to platinum status with Slitknot, but has worked other big bands like Metallica and Korn.

Later on, in 1995, Jordinson joined Slipknot whose other members included DJ Sid Wilson, Paul Grey on bass, percussionists Chris Fehn and Shawn "Clown" Crahan, guitarist Mick Thompson, and lead vocalist Corey Taylorand. In 1996, they released their first album called Mate.Feed.Kill.Repeat. .The record didn’t make good sales nor did it create a notable impact. In fact, many fans ridiculed the group for their ‘bogus music’ and scary attire. Only 1000 copies were produced and sold worldwide, but this album soon caught the attention of some promoters and label companies. After this slow start, Roadrunner Records label agreed to release their second album.

Their self named second album is considered as their official launching pad. Soon after it was released, it was able to sneak its to way to number 51 on the billboard charts. The group was now able to build a larger pool of fans around the world. The also took part in the summer Ozzfest package tour. Their live performances were a talked about topic among heavy metal lovers. They were now able to make crowds go wild with their performances.

Their third album was quite a thunder. It was named Iowa. Many industry observers had predicted that it would debut at number one on world charts; but stiff competition for the top slot that week made the album to come in at number three. Nevertheless, the album debuted in at number 1 in the US Billboard charts and number 1 in both the United Kingdom and Canada's national charts. This album sailed the group to super stardom in no time. The band later had heavy tour schedules including participation in 2001 summer Ozzfest. After the tour, they went on hiatus.

When the group was on hiatus, Jordison did other side projects for various artists and bands. He remixed "Fight Song" for Marilyn Manson and was also featured in Manson's "Tainted Love" video. In 2002, Jordison joined another popular band, Murderdolls. The band also featured, Wednesday 13 and Tripp Eisen. With this band, he was a guitarist and not a drummer, which shows how talented Jordison is. He did not wear a mask while performing with the Murderdolls as was his trade mark while with Slipknot. The group, which was initially known as The Rejects, produced an album named "Beyond the Valley of the Murderdolls". By the time the group went on hiatus they had become very popular especially in the United Kingdom and Japan. Though some think the group is split, Wednesday 13 still insist that they went on hiatus just to give Jordison a chance to go back to Slipknot and that they would come back together and record. Their last show together was on September 17, 2004 in Corona, California.

Jordison also played live with Rock & Metal bands such as Korn, Marilyn Manson, Emperor, Metallica, American Headcharge, Staind, Justice, Satyricon, and 3 Inches of Blood. In 2004, Metallica was to perform at the Download Festival, but they got stuck when their ace drummer fell ill. Jordison came to their aid and filled in as their drummer. He is therefore reputed as the one who saved the 2004 Download Festival. In 2006, he was the drummer for the industrial metal band Ministry. For the most of 2007, Jordison took over the drumming duties for the nu-metal band Korn. He toured with them for 5 months and he is also seen in their video for "Evolution" going back to the studio to work on Slipknot's fourth studio album. Jordison is also a talented songwriter. He has also now begun producing albums, with Fire up the Blades by the band 3 Inches of Blood, being the first.

Jordison is a very interesting and unique drummer. To get a complete understanding of his style and approach to drumming you should check out these Joey Jordison drum videos. 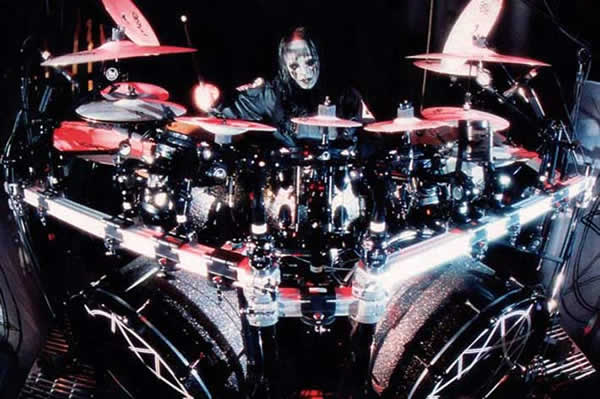