John Blackwell Jr. is a charismatic drummer, remembered as the man behind the funky drum sounds behind pop star Prince’s fame. His playing techniques of drumstick twirling and cross-over strokes make him stand out from the pack.

Born on September 9, 1973, Blackwell had music all around him. His father John Keneth Blackwell Sr. was a professional drummer, who did gigs with legends like Cornelious Crawford, The Drifters, Mary Wells, and The Spinners among others. His mother is Mamie S. Blackwell, a music enthusiast. Blackwell got is his first drum set when he only three years. His father also gave him a record player and a few records his father had collected from his playing days and other collections. From then on, love for music became part of Blackwell’s life and he learned to appreciate various band and musicians among them his favorite groups like Cameo, Prince, The Jacksons, Zapp & Roger, George Clinton and Parliament and Patti Labelle. His father also took him to all the concerts that took place in South Carolina till the time he was 21 years old.

Blackwell practiced hard through his growing years. When he joined high school, he became a member of the school Jazz and marching band and was the automatic choice for the drummer slot. Even at the age of 15, Blackwell’s talent landed him a chance to play with local bands in South Carolina area. These bands were, Robert Newton & Lotusfete a group that played R&B, Jazz and Fusion and Billy Eckstine band. He spared time on the weekends to play with these groups. He started playing with Bill Eckstine when he was 17 years old. This was his first professional and paid job as a drummer.

In 1992, John decided to go for further studies in music since he knew he needed to be a master in the changing scenario in the world of music. He therefore enrolled with the Berklee College of Music in Boston, Massachusetts. While at college, Blackwell never limited his life to classrooms. He was a busy man who split his time everyday between classes and performances, in and out of college. Within a short time of joining Berklee College, word spread to that a drum virtuoso was in town and so many local bands approached him to do gigs with him. He therefore played with several R & B groups as well as jazz bands. After classes, Blackwell used to teach and conducts drum clinics for drum students around Boston.

While still at Berklee he played with Herman Johnson, a renowned American Jazz Saxophonist. They played every week at Ryles Cafe in Cambridge, Massachusetts. Blackwell also played at at Wally's Café till the time he left Berklee in 1995. During this time also, he and his friend Jethro De Silva who was a bassist went to audition for Bebe & Cece Winans, a famed gospel act, but although they reached the finals, they did not get selected so they returned to Berklee to finish their studies

Soon after leaving Berklee in 1995, Blackwell joined legendary funk band, Cameo, a group that influenced Blackwell when he was still a young boy. Blackwell stayed with the group for the next three years. In 1998, was recruited by Patti Labelle and he moved to Los Angeles. He stayed in Los Angeles for only three days, but he played with Patti on an album, Live! One Night Only. This album won a Grammy Award and it was released in CD, DVD and VHS formats.

In 1999, Blackwell met Pop star Prince and Larry Graham while performing at a concert with Patti Labelle. Prince was greatly impressed by Blackwell and he invited him to do some work with his group. Blackwell then decided to start traveling to Minneapolis regularly to play with the band, though he still played for Patti.

In May of 2000, Blackwell was invited to join Utada Hikaru, a Japanese teen sensation and pop star on her tour tagged Bohemian Summer 2000 Nationwide Tour of Japan. The tour was massively successful and they performed continually for three months. Hikaru also featured Blackwell on her album Distance, where he appeared on the song Parody.

Soon after completing the tour with Hikaru, Blackwell joined Prince and the New Power Generation, a group he performs with till today. With this band, Blackwell has achieved great success and fame and much appreciation from Prince who feels Blackwell filled in when he was really needed to propel the group to greater heights.

Blackwell also featured on the famous Modern Drummer magazine in 1998 August edition. He was featured in an interview which was entitled Diamonds in the Rough. The magazine deemed him as a Promising drummer, and for sure, he is one. 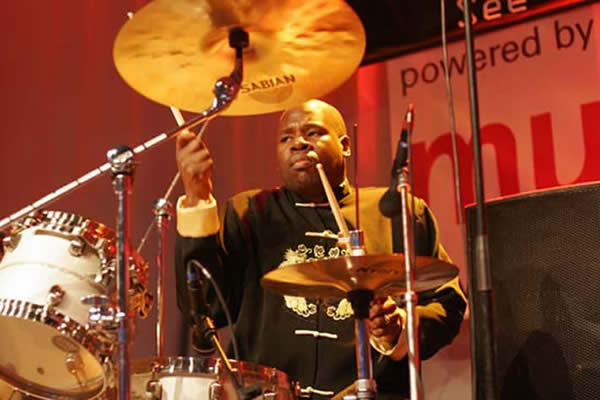