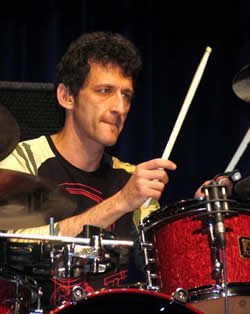 Jojo Mayer, a drummer based in New York, is known for his creative and innovative drumming techniques, which make him one of the best solo drummers in the world. Mayer was born on January 18, 1963 in Zurich, Switzerland. He grew with a lot of music influence around him. His father, Vali Mayer, was a bass player. When he was a child, he traveled extensively with his father, going as far as the Far East and throughout Europe. He got his first drum set at the age of 2, a set he made use of to perform for the public in Hong Kong when he was only 3 years old.

Mayer joined a professional band when he was eighteen. The Band was the Monty Alexander's group which embarked on a European tour soon after he joined. The band performed in all the major jazz-festivals including the North-Sea-Jazz Festival, Montreux, Nice, Antibes, Athens etc. While on these tours, Mayer got to meet jazz-greats like Dizzy Gillespie and Nina Simone who introduced him to the international arena.

Mayer’s reputation as a performer and instructor has soared, not only among his fans, but among his fellow musicians too. He has performed in some of the biggest and most famous drum festivals which include the Modern Drummer Festival (1998 and 2005), the Buddy Rich Memorial Scholarship NYC (95), the International Drummer-Meeting in Koblenz (89, 91, 95), PASIC (96), the Montreal Drum- Fest (96), the NAMM-Show's"Drums along the Hilton"(96), int. Slagwerkkrant Dag (96), int. Budapest Dob-Gala (94, 95), Manny's Drum-Mania NYC (98) and the "int. Musik Messe Frankfurt"(93, 97), where he played alongside world renowned drummers including Dave Weck, Terry Bozzio, Jack de Johnette and Billy Cobham, among others.

Mayer moved to the United States in 1991. He is busy studio recording for various artists. He is also involved with various live performances featuring some of the notable bands and musicians. Watch these Jojo Mayer videos to see and understand Mayers unique approach to playing the drums. Mayer is a resident of New York city, but spends a lot of time on international tours which have so far taken him to Europe, the US, South America, The Far East and Africa. Mayer is also an established writer and producer besides being a world class drummer with many projects on the cards.

Jojo Mayer has established a weekly party event in New York called Prohibited Beatz. The event is one of the most famous events in the city. Though the event is doing well and the attendance is at the top, Mayer takes time to venture into various avenues to promote it. Mayer has recently produced his first solo project called Nerve. He has adopted some the new styles, most of which of which have been created by him, in his new project. The styles include "Drum n’ Bass", "Nu-Skool Breaks", "Speed Garage" and employment of disc jockeys to remix the music. His two projects, Nerver and Prohibited Beatz have gained popularity, not only in New York, but beyond New York and are slowly forming as a new music culture across the world.

Jojo Mayer's has endorsed various music products and companies. He is also seen in the advertisements, catalogues and publication of those companies. The products he endorses includes Sonor drums, Sabian cymbals, Remo drumheads and Vic Firth drumsticks. Recently he is colaborating with Sabian, as designer and product developer (Jojo Mayer Signature "Fierce Ride" & "Fierce Crash" Models). He is also a consultant for Sonor's "Jungle Kit" and designer for Vic Firth drumsticks (Jojo Mayer Signature Model).