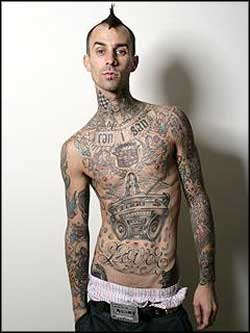 Travis Barker is rapidly becoming more of an influence on rock music than an influential musician! His fame and success are rising swiftly on all that he is or undertakes. As a musician, he has and still is on the headlines, whether it is about his fame and success, or his personal life that always has a story with a twist. Barker has gained immense popularity even as a producer, a reality show TV celebrity, a business man and designer.

But no matter where his achievements emanates from, Barker is first and foremost a drummer of great repute. Born on November 14, 1975 in Fontana, California, Barker got his first drum set at the age of four and begun taking drum and trumpet lessons the following year. Though born in a poverty-stricken neighborhood, Barker’s mother was an encouraging force behind young Barker.

Barker lost his mother just a day before joining Fontana High School. He was devastated but not discouraged. Before she died, Barker’s mother told him to continue playing drums since he was good at it. With this in mind, Barker made use of every opportunity he got to play drums. While at Fontana High School, he joined the marching band and performed at regional competitions and festivals. In his last year of school, Barker was invited to tour with his first band, Feeble.

In 1993 Barker graduated from high school and continued playing with Feeble. He also did jobs with bands like The Suicide Machine and The Aquabats. While with The Aquabats, his stage name was Baron Von Tito. In 1997 he recorded one album with them, The Fury of the Aquabats! It is from these engagements that Barker gained much experience as a rock drummer. Until 1998, Barker taught drums and did other odd jobs to support himself.

His career got a boost in 1998 when he joined a punk rock group Blink-182. Thought he was still attached to The Aquabats, he had Blink-182 on cards, but there was no ready opening. The break through came when the Blink-182 drummer Scott Raynor was dropped from the group. The group needed a drummer desperately since they had a show that night and so Barker was required to learn over 20 songs in two hours and perform them! The seemingly impossible assignment was accomplished with a remarkable aplomb. This earned him great respect and admiration from the group members and he cemented his place as drummer once and for all.

While with Blink-182, the group won various awards including the Teen Choice Award, an award for the Best Group Video. The last award was presented to them at the MTV music award of 2000 where they also performed their hit song, “All Small Things”. The group has also won the MTV Europe Award for Best New Act and was invited to perfume at the Saturday Night Live and twice on Tonight Show. Apart from their exploits in music, the band has made an appearance in the movie American Pie and was once honored to be the opening act at the Billboard Awards.

Blink 182 has also been on the cover of music and lifestyle magazines such as Rolling Stones, Alternative Press and Teen People. The band was one of the greatest punk rock bands in the world and sold millions of records world wide by the time they disbanded in 2005.

Blink 182’s popularity spread like wild fire especially after their first full length album ‘Cheshire Cat on Grilled Cheese’ in 1994. Due to this, their concerts’ tickets were all-sold-out wherever they performed. The band’s hit album ‘Enema of the State’ with Barker as the drummer that has caused quite a stir in the rock music industry. This album was followed by Take off Your Pants and Jacket in 2001 and Blink-182 in 2003. The group finally split up in 2005 after being together for seven years.

With the split of Blink-182, Travis Barker and Mark Hoppus started a new group named Plus 44. The group lead singer is Carol Heller of Get The Girl. Barker has also done several side projects, notable among them the ‘Box Car Racer’, which he teamed up with Tom DeLonge, his Blink-182 band mate. Barker has revealed that he has a strong liking for hip hop. For that he, Tim Armstrong of Rancid and Rob Aston have done a side project called Tranplants which is a hip-hop induced punk band. The group has produced studio recordings and two albums, one self titled and the other called Haunted Cities.

Barker has also worked with the Black Eyed Peas, Pink and Pharrell Williams. He appears on Bun B's album, Trill (2005) with Skinhead Rob for the bonus track, "Late night creepin". In 2006 he was a producer on T.I.'s fourth album, King. In 2006, he played drums for several songs on Avril Lavigne's third album. He also did a duet with Rihanna on a remix of her hit song, "Umbrella", and also appeared in her video. In 2006, Travis and Rob Aston joined Paul Wall in forming a new hip-hop group called Expensive Taste.

Barker has been doing other businesses too apart from music. He has his own clothing company, Famous stars and Straps and in 2004 started the LaSalle Records. He also has Wahoo's Fish Taco restaurant in Norco, California. He has co-designed and endorsed a number of products including Zildjian cymbals.

Barker is married to Shanna Moakler, a former Miss USA though they have already filed for divorce. They nevertheless have been stars in a reality TV show, Meet the Barkers. He has also had a short time relationship with Paris Hilton. 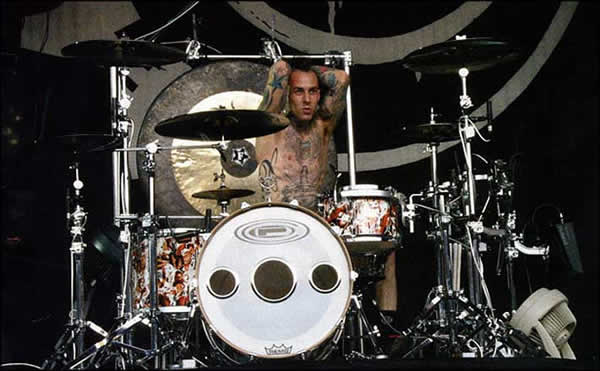