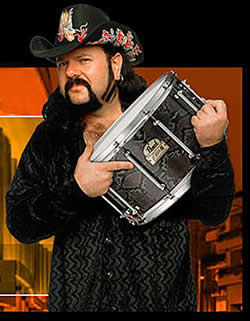 The birth of Vinnie Paul (Vincent Paul Abbott) took place on Wednesday, March 11, 1964 in the state of Dallas, Texas, USA. He is famous for his heavy metal drumming and is also a producer of the same. Both the brothers Paul and Darrell got interested in music while they were growing up in Pantego, Texas, where their father owned a recording studio. From a very young age they were exposed and encouraged to pursue music. Their Dad also allowed them to experiment with the recording equipment and with all types of music in general. This we can see was what made Paul the co-producer of Pantera. His younger brother, known as Dimebag Darrell used to jam along with him in the band Damageplan, till 2004, where he was shot and killed at a 2004 live show.

Many performers like Scott Travis, John Bonham, Tommy Lee, Neil Peart, Alex Van Halen, Bill Ward, and Dave Lombardo have something in common? Just like Vinnie Paul, they are considered the best hard rock drummers of all time. No other drummer is history can go from playing ballads to break neck blast beats like Vinnie Paul. Songs like 13 Steps to Nowhere, Regular People, and Use My Third Arm, are evidence of his talent as a metal drummer in the past and in the present.

Most drummers are normally good at a certain style of playing, whether double bass really fast, blast beats, country music, or some other type of music on the drums. But Vinnie can play any style of music. He is a very versatile drummer with oodles of talent. He will leave you mesmerized and asking for more. Vinnie is known for his great timing, amazing sound, and technical knowledge and ability to perform. No one has ever been or will be as versatile and talented, behind the drums as Vinnie Paul.

In 1981, five heavy metal cowboys coming from Texas formed a band, Pantera, which is the Spanish word for "panther". Singer Donnie Hart, guitarists Terry Glaze and Diamond "Dimebag" Darrell, bassist Rex "Rocker", and drummer Vinnie Paul started off playing hits by Motley Crue and Bon Jovi around various bars in Texas. Donnie Hart soon dropped out of the band and Glaze took up vocal duties. Then, in 1988, Glaze was replaced by Phil Anselmo, with whom Pantera went on to become one of the most popular heavy metal groups of the 90s. The local dailies had described Pantera as a noisy and angry sounding band. They felt that the group was very aggressive for the current music scene.

Before signing up with a major label, Pantera released four independent albums. In 1990, East West released the group's ‘Cowboys From Hell ‘, which rose to gold status. Featuring metal radio hits like "Cowboys From Hell" and "Cemetery Gates," Cowboys From Hell achieved most of its fame from Pantera's live performances. Vinnie and the gang’s lives were spent on the bus, in the venue, and on stage. They felt that they did it for the youngsters and with all that they had within them. Pantera also played for the Monsters of Rock festival tour, and opened for AC/DC, Metallica and the Black Crowes. They were the smallest band, so their fame could really be seen among all the big bugs.

Pantera released their second LP, Vulgar Display of Power, in 1992, which ended up selling more than a million copies and reaching number 44 on the Billboard charts.

"Pantera went on to release "Far Beyond Driven" (1994), "The Great Southern Trendkill" (1996), and "Reinventing The Steel" (2000), with a live album compilation named "Offical Live: 101 Proof" released in 1997 and a greatest hits comilation "The Best of Pantera: Far Beyond the Great Southern Cowboys' Vulgar Hits!", released in 2003. The band's sound evolved greatly from album to album, each exploring darker and more experimental lyrics and compositions."

Around the year 2000, Vinnie Paul created a "Country Metal" side project called "Rebel Meets Rebel", featuring Rex Brown on bass, "Dimebag" Darrel on guitar, country legend David Allan Coe on vocals and Vinnie himself on drums. They recorded the album during the "Reinventing the Steel" tour, but it was released in 2006.

Pantera then broke up in 2003 due to internal conflicts, and the Abbot brothers went on to form a band called "Damageplan", but this project was cut short by Dimebag's assasination while onstage on one of the band's shows in 2004. After this incident, Vinnie gave up drumming.

Vinnie Paul formed the record company "Big Vin Records" in 2006, and has released the "Rebel Meets Rebel" CD and the "Dimevision: Volume 1" DVD.

In 2007, Vinnie decided to take the drumsticks back up and joined the soupergroup "Hellyeah" with Mudvayne vocalist Chad Gray and guitarist Greg Tribbett, Nothingface guitarist Tom Maxwell, and Damageplan bassist Bob Zilla. They are currently on tour. 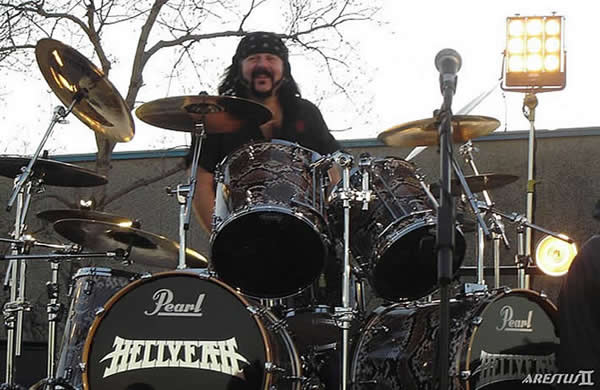