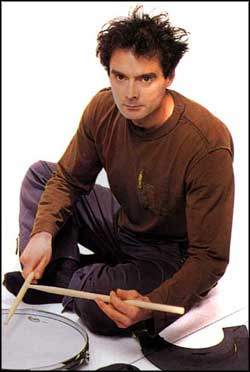 The best professional drummers come from all across the world; bringing unique styles from their culture and upbringing. In this case, a very talented drummer named Virgil Donati arose from the land down under – Melbourne Australia. Virgil Donati has been a drumming superstar ever since he was a young boy; however it wasn’t until the late 80’s where he really started to shine. Playing for popular rock bands Planet X, and famous guitarists Steve Vai, his drumming style has certainly been admired. With so many years of practice and experience, Donati has created a following for his unique style of drumming.

Virgil started playing the drums as soon as he was able to hold a drum stick. By the age of six, he was playing for his father’s showband. It was in these early years of his life where he decided he wanted to be a professional drummer. He immediately started taking private lessons by the age of 7; however due to the isolation of Australia, Donati had to learn most of his skills on his own. By the age of 15, Virgil had joined a band named Cloud Nine – later to be renamed Taste. He decided his best route would be to drop out of school to focus on music, and at the age of 15 he did so. He focused on piano and drums, practicing for hours a day. His band Taste played 6 nights a week. This helped develop Donatis live performance and chops.

Virgil decided to move to the USA at the age of 19 to study drums at the Dick Groves School in L.A. This was a very vital stage in his life, as he learned from snare drum specialist Murry Spivak, and drumming legend Philly Jo Jones. He also took an interest in jazz music, and started to imitate some of the jazz legends like Buddy Rich and Gene Krupa. He eventually returned to Australia to start a career in jazz music at the age of 21. After playing many session gigs, pop gigs, and rock gigs, Virgil’s career had finally started to grow in popularity. In 1995, he created a solo album called Stretch which really put his name on the map. In 1996, he moved back to LA to pursue his career in rock and fusion drumming.

Virgil Donati is known for many achievements behind the drum set. One of the main aspects he is famous for is his development of the double bass pedal. He is one of the first drummers to take double bass drumming to the next level; playing blazing fast doubles in the mid 90’s. This propelled him as a very talented drummer. He is also known for his work with such musicians as Steve Vai, Cab, and Planet X. Donati is a master of polyrhythms; being able to play the most unusual beats that are very hard to comprehend.

Through the years of his playing, Donati has created a number of instructional products, and has played for numerous drum clinics. Donati is known for playing Pearl drums. All in all, Virgil Donati is a very talented musician that has grown in popularity over the years of his career. He is definitely a drummer to be recognized in the drumming community!